Meet the artist behind the anti-racism billboard on Spadina 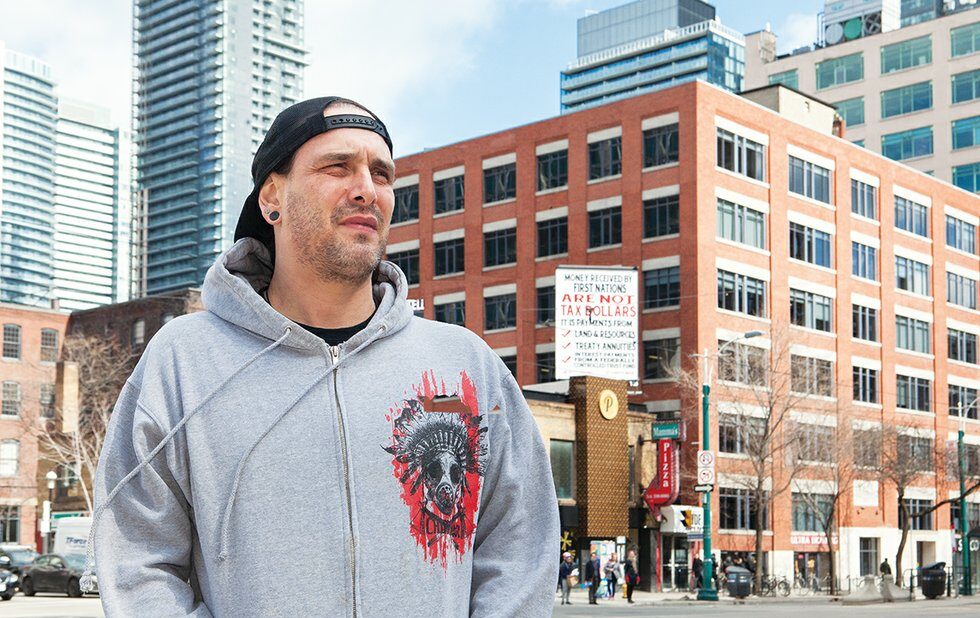 Chippewar (aka Jay Soule) has been motivated by institutional racism in all of his work, from his streetwear line and public art, to his revisionist movie poster series.

But the Toronto-based multidisciplinary artist’s latest effort is one of his boldest moves to date: a billboard at the southeast corner of Spadina and Richmond dispelling the myth that tax dollars go to Indigenous people.

In his signature white background and black-and-red font, the poster reads: “Money received by First Nations ARE NOT TAX DOLLARS, it is payments from land & resources, treaty annuities, interest payments from a federally controlled trust fund.” The sign went up in early April and will be there until the end of the month. The $1,600 cost came out of his own pocket.

By Soule’s count, photos of the billboard were shared around 13,000 times from his Instagram and Facebook posts, extending the message well beyond the downtown Toronto corner, which he chose because it’s a direct route to the highway.

“I didn’t think it would go far,” he tells NOW. “On another campaign I did on cultural appropriation, I got about 50 pieces of hate mail and this one there’s been maybe 0.1 per cent of the trolls and they keep getting shut down because there’s like five Indigenous people jumping on them.”

You may have seen Soule’s public art projects in Toronto before. He previously put up a billboard over Queen West quoting former Prime Minister Stephen Harper, who said the inquiry for Missing and Murdered Indigenous Women wasn’t high on his radar. Last year, he created an anti-Canada 150 sticker campaign that was so popular he ordered more than 17,000 stickers. He also made a “not so funny money” sticker campaign calling out racist figures on Canadian currency.

Does he feel like his artwork – which also includes an “Honour Our Sisters” T-shirt, and a Quentin Tarantino-inspired movie series (Kill Buffalo Bill) – is responding to the same thing?

“I never really thought of it that way until you said that. It’s all based on a response to institutionalized racism,” he replies. “To the core of it, the movie posters are calling out Hollywood, an institution that portrays Indigenous people in a certain way. That then feeds into stereotypes through cinema and television and places like that.”

This latest piece calls out institutional racism while also unpacking a persistent stereotypes that goes something like this: “We need to stop spending tax dollars on these Indians.”

A couple of recent experiences motivated him put the billboard up.

“There’s a need to educate people about where exactly Indigenous money comes from,” Soule explains, adding that he consulted with his community of Chippewa of the Thames near London, Ontario, to confirm they do not receive tax dollars. “It comes from a variety of places, but not tax dollars.

“The government uses the word ‘funding’ as a means of confusing the public,” he continues. “Because if the public understands that it’s not funding and it actually comes from treaty annuities, land and resources, interest payments from our trust fund, they’re far less likely to be racist assholes or say generalized statements.”

Soule’s second motivation was when he interviewed for a job with a PR firm working on an Ontario government ad campaign about systemic racism. He felt like he nailed the interview up until he suggested putting institutional racism, rather than systemic racism, at the heart of the campaign instead.

“I don’t hold the everyday racist as responsible as I do the government’s responsibility in institutional racism,” he explains. “Most people who are being systemically racist are saying things they heard down the line, from a friend or family member. They’re just parroting. Most times [it’s] misplaced aggression.”

Despite his confidence, Soule felt like he talked himself out of consideration. He didn’t get the job, but he’s proving his social media savvy with his own street art.

“What other avenues are there to get our messages out there?” he says. “Street art is vital.”

Especially when it’s a means of dispelling commonly held, and incorrect, beliefs.

This article is sponsored by XL Media.

According to Sam Mizrahi, inevitable market correction in Toronto is unlikely to affect thriving luxury sector

This article is sponsored by Mizrahi Developments

This story is sponsored by Canada’s Walk of Fame

Things to do in Toronto on Canada Day weekend: July 1-3

Including the launch of the Dream in High Park Summer Music Festival, Kamloopa, Beaches Jazz Fest and Canada Day fireworks

Pride Toronto 2022 in photos: Can’t rain on our parade